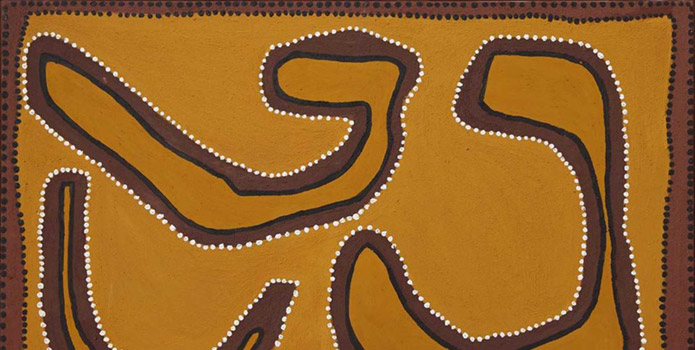 Ochre Is Used As Foundation of Cultural Expression

Ochre is one of the principal foundations of Australian Indigenous art. Ochres are primarily natural pigments and minerals found in the soil, or even in charcoal. These natural pigments (colours) were originally used to depict Dreamtime stories and maps. They were used either in body painting, rock painting, on artefacts and sometimes even on sand.

They were the first ways for the people of the oldest continuous culture on the planet (at least 65,000 years old) to tell their stories in a visual format. Indigenous people never had a written language. They did tell stories through either oral traditions such as stories and songs or through the use of symbols like the concentric circles, U shapes and straight stick forms. These were all done using the natural pigments that were found and even specifically mined.

Ochre As A Traded Commodity

Originally ochres had an enormous value. In fact, they were traded between different tribal groups across Australia. There were trade routes almost like the silk routes that went through Asia. However, instead of silk, in this case, the valuable products were natural ochre pigments. Some were more highly prized than others. They had great value. Some places didn't have a lot of ochres, but still had the same needs to tell the stories and record images of Dreamtime spirits. Sometimes they gave warnings regarding hazards or instructions about how to find the nearest water hole, or where there was good hunting for different types of animal and fish. However, the main use was in storytelling and depicting important Spirits and totems. All of that message making was enabled by utilising natural ochre pigments. Without that material, art would have been much more limited to scratchings in rocks and carvings. Many of those still exist to this day.

Ochre was a lot easier form to use, it was immediate, and it was especially prized for body painting for big ceremonies, initiation ceremonies or dances to do with rain. The Seven Sisters stories were often represented by ochre pigments in women's body painting and men's paintings.

Ochre had a few drawbacks as there were only about six available colours even with blending and mixing, so it did limit your palette. In some ways, these palette restrictions also produced an art form that was more rigorous, more defined, and it taught people to consider the use of colour. If you only have a limited palette, it does teach you which colour to use next to another colour. That is how you learn what works. You've only got a limited number of options. It carried on for tens of thousands of years, the use of ochre. It defined Indigenous culture and character to the wider audience right across Australia at the time.

The advent of the Indigenous Fine Art Movement around 1971 saw the introduction of acrylics or synthetic polymers. Suddenly there was a whole rainbow of colours available to artists. Initially, many artists, like those in Papunya, embraced the use of acrylics because they were easier to use and available. You didn't have to mix them with a binder to affix them to a board or an artefact or the cave wall. They were just a lot simpler to use. Even so, many artists stayed with the original palette even when using acrylics. This carried on for quite a few years.

It wasn't until artists like Walmajarri Jimmy Pike from the Kimberley came around in the 1980's that the use of colour shifted. He introduced extremely strong, vibrant acrylic colours, and even texta colours into his paintings that completely transformed the movement. There's a real dividing line then. There was then a transitional phase from ochre to acrylic in the Central and Western deserts. After that, there was a real flourish of colour across the whole movement. Artists were embracing colour and the different options it gave them. Many of the artists, even though they had often worked with a limited palette most of their lives, were brilliant colourists, and natural at using colours, putting colours together sometimes you don't think would work together. Instinctively they did, and they knew what they were doing.

That underpinned the rebirth of the Indigenous Fine Art Movement to its recent peak in 2007 where it achieved international worldwide success. If it had just been limited to ochre, it would not have had the same impact worldwide. It's hard to know for certain, but I doubt if it would have.

Ochre Still In Use

Paradoxically today there are still several communities using the traditional ochre pigments in their paintings. One of the main ones is Warmun Art Centre, which used to be called Turkey Creek up in the Kimberly. Some of the greats of the Indigenous Fine Art Movement came out of the use of that ochre.

As I was mentioning before, that restraint engendered by the use of natural ochre pigments and the limited palette probably led to the genesis of one of the greatest artists, Rover Thomas Joolama, who is famous for his vary spare paintings where less is more. He went on to achieve international success. I think it's in part through his use of the medium of natural ochre pigments that informed his storytelling and his painting skills. Some of the other greats from the movement were Queenie McKenzie, Jack Britten, Hector Jandanay from that one community alone. They carried the banner for ochre pigment painting.

Ochre Use in Crosshatching

In the Northern Territory, specifically in the Arnhem Land and in the Tiwi Islands the adherence to natural ochre pigment carries on to this very day. A lot of the artists in those communities use rarrk, which is a crosshatching format of painting using natural ochre pigments. In this crosshatching, each artist has their own identifying rarrk. They're all painted in the limited palette of natural ochre pigments. In Arnhem Land they're still using ochre and their works are very fine. They're also often figurative. Some also embrace the technique that today call X-ray style where you can see the internal workings of animals. They also use the ochres to paint totems, and statues and carvings, usually made out of the local ironwood, but also of other woods found up in the tropics. To this very day most of the art from those particular regions in the Northern Territory and Arnhem Land, is still painted in traditional ochre pigments. Even with the body paintings that still carries on the ancient traditions of using ochre pigments.

This is true too of other communities which have embraced acrylics and synthetic polymers for their paintings. They've still retained the use of ochre pigments for their ceremonial dances and corroborees. Ochre still has a spiritual significance to Indigenous people and has that ancient connection that goes back unbroken for tens of thousands of years. The use of ochre underpins, to a large extent, Indigenous art and culture from all around Australia.