Edward Blitner was born in southern Arnhemland in 1961. His bush name is Taiita and he is from the Ngukkurr Community (now called Yugul Mangl) in Naiyarlindji country on the Roper River, approximately 270 km south-east of Katherine in the Northern Territory.

Later Edward Blitner attended school at Concordia College in Adelaide until he was sixteen. When he returned to the north as a young man he worked as a stockman and general hand on Victoria River Downs. Edward Blitner was at the Gurrinji walkout when he was a youth, and has mixed with all of the language groups who populate the northern country from Roper River to Kununurra. This part of the country remained home for the next thirty years. Edward Blitner has also lived for periods of time at Katherine, Victoria River, Kununurra and Broome.

Edward Blitner started painting when he was seven, learning from his grandfather who painted with natural ochres on bark. He says of this time, “My grandfather would be painting on bark and we kids would sit around him and watch him grind the ochres and mix the colours. After a while he would tell us the story for that particular painting and also teach us the songs and dance for that story. When he was in a very good mood, he let us paint the sides of the bark painting. That was my start.”

It has taken Edward Blitner many years to learn to paint the stories and the Dreamings passed on to him by his grandfather. He is also an accomplished woodcarver. Some of his bird carvings stand two meters high and are fully decorated and cross-hatched. The detailed cross-hatching forms part of the paintings and carvings, and is from the artist’s clan design. Edward Blitner uses the styles and subject matter of his traditional country in southern Arnhemland. He maintains the palette of natural ochre colours he usually adopts for the traditional patterning of cross-hatching referred to as rrarrk. 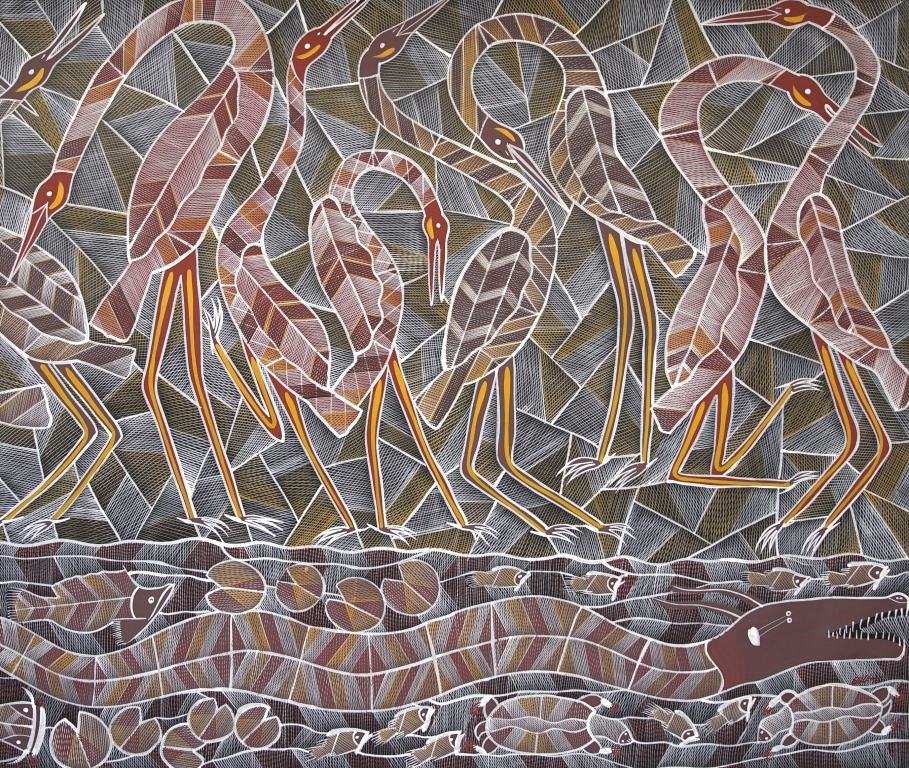 Eddie Blitner has in one way the most traditional of approaches to his art, in that he uses the rarrk or cross-hatching style of patterning that’s typical of much traditional artwork from Arnhem Land. His pallette is held to the basic earth colours that artists have used in the area for millennia. He creates images of animals, birds, the water-life, everything that sustains the people in the area. There are many images of brolgas, barramundi, turtles, goannas, stingrays and different kinds of fish. Occasionally you might also see crocodiles and kangaroos. Eddie often includes the Rainbow Serpent image as well. 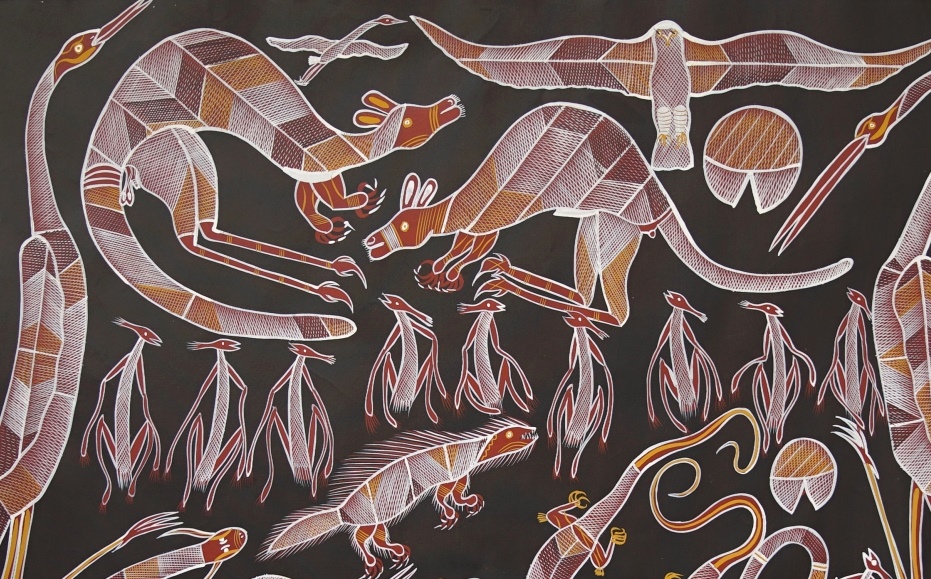 What we find is so interesting in Eddie Blitner’s artwork is that he takes a contemporary approach to painting while maintaining traditional references. You’ll see influences from the ancient rock paintings of Arnhem Land. There’s something in the way he bends and merges the forms to make them interact that is his own special contribution to the traditional style. The brolgas are often overlapping each other, there’s a sinuous way their bodies move across the canvas. That’s one way the artist brings complexity to his compositions. Also, it is in the way he combines the animal forms and the rarrk, the cross-hatching. Sometimes he uses the rarrk right across the background, and it blends with the movement of the animals. Eddie Blitner is concerned that the traditional style of painting that he was taught by his grandfather is not being carried on by the younger generations of artists. Eddie is in his mid-fifties. He’s seeing that relatively few artists from his part of southern Arnhem Land are continuing to paint using the traditional motifs and traditional cross-hatching designs. He’s concerned that this traditional art will cease to be produced in this part of the country. They’re still being produced in more northern regions of Arnhem Land, but in communities like Ngukurr, a more contemporary approach to painting is evolving. Eddie works with the traditional colours, a restricted palette of black and white and red ochre and yellow ochre. The more contemporary paintings by younger artists are tending to introduce the colours that are available in professional artist paints. They are bright and vibrant.

Eddie’s most recent work includes a body of work with big paintings and tiny paintings. It is exquisite work, very typical of the style of Arnhem Land. We’re enjoying having a good solid body of his work in the gallery again. In some ways, Eddie is more interested in the compositional elements of what he’s doing. Rather than painting a bird, or a fish, or some other aspect of nature, he brings them together in a really lively way. They become their own composition. They are no longer just separate images of animals, they become an amalgam, a moving group of birds or fish. This reminds me of aspects of rock art. After hundreds or even thousands of years of over-painting, you’ll see images on the surface that are clearly defined and then as well the ghosts of images from artists’ work further back in time.

In many of the paintings, Eddie has placed the Rainbow Serpent, the powerful mythological Water Spirit. Its image is serpent-like, looking much like a sea creature with horns. Part of the mythology of the Rainbow Serpent is that it is responsible for the water and the recreation of the earth. The Mimi spirits are often grouped together in paintings with the Rainbow Serpent to show the activity that’s happening in everyday life. The Mimi spirits are considered to be the kind of harbingers of human activity. They brought knowledge and information about all aspects of living and survival that people would continue to follow.

So in Eddie’s painting, we’re seeing the Mimi spirits enacting everyday life. We see the Rainbow Spirit as the powerful force in the centre of it all.