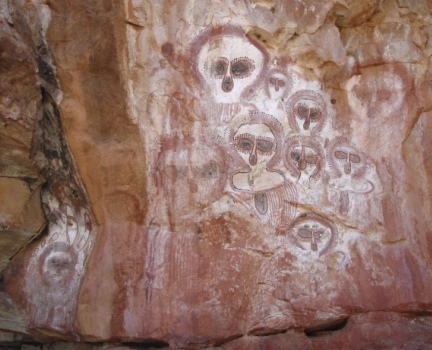 Wandjina is a powerful Rain Maker spirit associated with the north-west region of the Kimberley in Western Australia. Wandjina dreamtime images are painted on the rock galleries and in caves throughout the region, marked in red and white ochre. The Wandjina images are painted in significant ritual sites for Aboriginal people of the region, and the paintings were traditionally repainted each decade to ensure the image was kept fresh and lively.

The significance of the Wandjina dreamtime story was shared by a number of language groups across the west and coastal areas of the Kimberley, including Ngarinyin, Worrorra, and Wunambul people.

Wandjina is the most significant Creation Spirit, associated with rain and therefore the seasonal regeneration of the land and all natural resources. The body of Wandjina is often shown covered with dots that represent the rainfall. The cyclonic wet season brings rain to the Kimberley, and elements of the torrential rains, lightning and thunder are often included in the imagery around the head of the Wandjina. Ceremonial dances that pay homage to the Wandjina Rain Spirit can include headdresses that symbolically refer to lightning and thunder.

For people of Mowanjum community, near the town of Derby in the Kimberley, the Wandjina brought the law, the culture and the language of their people. Their Dreaming stories tell of the first Wandjina, called Idjair, who lives in the Milky Way and is the father of all Wandjinas. The Wandjina Wallungunder was Idjair's first son and he created the Earth and all life upon it. After that he created the first human beings, the Gyorn Gyorn people.  Wallungunder travelled back to Idjair to bring back more Wandjinas to give the Gyorn Gyorn people laws to live by. There are three Wandjinas which represent the three language groups of Mowanjum. They are Namarali for the Worrorra people, Wodjin or Wanalirri for the Ngarinyin people, and Rimijmarra for the Wunambul people.

Some attempts to date the rock paintings of Wandjina in the Kimberley suggest that they may date back 4,000 years. The Wandjina images are often painted alongside much older images of Gwion Gwion (Bradshaw figures), that date back at least 18,000 years. While the Gwion Gwion paintings have been fused into the rock by millennial climate changes, the rock paintings of Wandjina are temporal and will deteriorate with the effects of fire, flooding, rainstorms and human and animal contact. Contemporary Aboriginal artists of the region continue to paint the Wandjina images on canvas, which allows the great Rain Maker image to move beyond his traditional Kimberley sites.