Gabriella Possum Nungurrayi, b. 1967 at Mt Allan, the oldest daughter of Clifford Possum Tjapaltjarri, paints the traditional stories of her Country 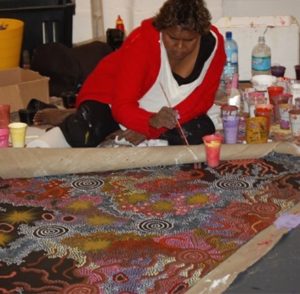 Who is Gabriella Possum Nungurrayi?

Gabriella Possum Nungurray is an Australian Aboriginal artist. She is an Anmatyerre speaker born at Mt Allan in 1967.

Gabriella is the eldest daughter of Clifford Possum Tjapaltjarri, one of the most famous of the founding group of painters who worked at Papunya during the 1970s and 1980s. Taught by her father, Gabriella began painting at an early age.

She won her first award in 1983 at the Alice Springs Art Prize.

What are Gabriella’s themes and colour palette?

Gabriella’s colours are inspired by the dramatic colours of her central desert homelands. Her medium is acrylic on canvas.

Working with traditional stories Gabriella, like other younger central desert artists, has absorbed the technical skills of her elders while bringing her own inventiveness to her stories in her unique way.

Her Dreamings have been handed down through countless generations of ancestors: 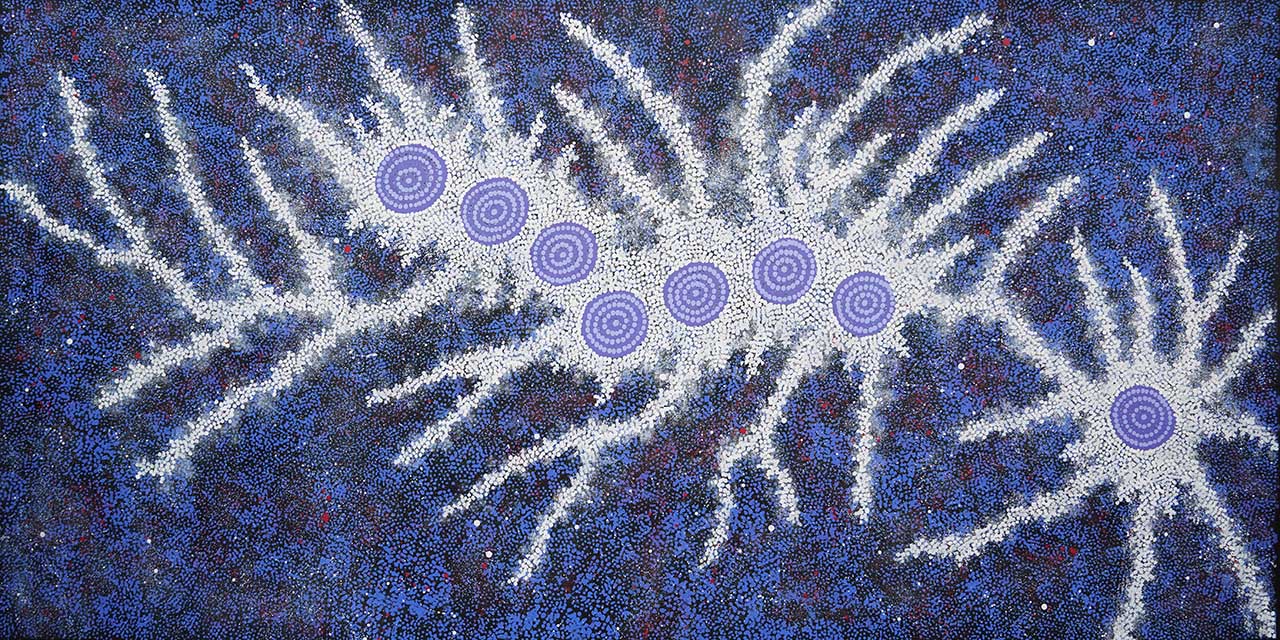 The Seven Sisters Dreaming was inherited by Gabriella from her mother and grandmother and given to her by her father. This story takes place at ‘Twenty Mile’ located near Napperby Creek in the Northern Territory.

The Seven Sisters travelled over a vast expanse of country, until they realised that they were being followed by a man called Wati-Nyiru who was a Tjakamarra man. He was an evil person who wanted to seduce the sisters and have ownership of them. They tried to hide from the man in caves. However, the man began disguising himself as many different objects to deceive them. With little hope of relief from the man, the seven sisters escaped through a fire at Kurlunyalimpa to the Milky Way where they became the stars of the Pleiades in the Constellation Taurus. There they were safe and they forever watch out over all women on earth. Wati-Nyiru followed them to the heavens and became the star Orion, still forever unable to get near them as they move across the night sky. Gabriella’s story Grandmother’s Country – Bush Tucker depicts the artist’s grandmother’s country near Mt Allan, or Yuelamu, in the Northern Territory. This is an important place for the artist and her family. There is bush food in abundance and women are shown collecting foods on these canvases. They depict waterholes and meeting places and many types of bush food such as berries, yams and honey ants. Gabriella’s paintings have been exhibited widely in Australia and overseas, and she is represented in major private and public gallery collections.

Stories of Land and Sky By The Possum Sisters