Sophie Jaques is a Visual Arts teacher at Seton Catholic College in Perth. In 2016 she initiated a project for the Year 7 class.  Aboriginal art and culture were explored across whole school year in several subjects. Here she describes how the project came about and how it worked.

Can you tell me how did this project come about?

I arrived in WA from England 14 years ago and I asked my family, “How can I meet indigenous Australians? I feel like I’m migrating as a white person to this land. How do I reach out?”

They said, “Well, it’s just about connections that you make. Unless you’re going to go out to communities. It’s quite difficult in Perth because the Nyoongar culture is so decimated.”

I took that onboard. At the first school I worked at I talked to some teachers about exploring indigenous culture. Somebody said to me, “Don’t touch it with a barge-pole.” People were concerned that they didn’t know how to approach the topic properly. I was scared off for a few years. Little by little indigenous culture has become more important to me. The family I married into found out about their own indigenous roots.

I feel being an Australian is about all of Australian culture including Aboriginal culture. I didn’t feel as though this was reflected in the teaching of the arts at the school where I was working at the time.

What did you decide to do in your current role at Seton?

I decided to talk to as many teachers as possible first off. I decided to find out what was happening in other places and what resources already existed. I talked to the other teachers of media, music, dance, drama and wood work and visual arts. We talked about planning a program of events for our Year 7 students.

In visual art I decided to make the whole semester about Aboriginal art and explore it as deeply as I could.

What were the outcomes you were seeking?

I wanted our students, no matter what their cultural heritage, to have an understanding of how Aboriginal culture works traditionally and in contemporary society. I wanted our group of teachers to become more confident in delivering that.

What sort of planning and preparation did you do in advance?

I started talking with people through existing networks and connections. I work for Catholic Education so I called the Catholic Education Aboriginal office. They were extremely helpful and basically I said “Here I am. I am a white English woman teaching in a Perth school and I want to teach Aboriginal culture. Where do I go?” They said “First off, that’s fantastic.”

I think my biggest concern was to avoid doing anything inappropriate or insensitive. There is so much to learn about how to approach this material respectfully. I got the green light from everyone I spoke to. They gave me names of artists and elders that I might be able to call in. That’s where I started.

What did you do in your visual arts program? Can you talk about the sessions?

In visual arts I decided to look at the seasons of the year. I found that there are some great resources online. Japingka has been really useful to me. The Bureau of Meteorology has a really good website on the six seasons. It gives information about the plants and animals that you will see in each season. My students started with their birthdays. They found out which season their birthday was in and found out about the colours that occur in their season. They then researched the flora and fauna from that season.

Ngurrara Canvas
We then moved on to drawing some of the common symbols you might see in indigenous art. We looked at the Ngurrara Canvas. It’s 10m x 8m. I knew someone who had met the artists so there were stories I could tell the students about that painting. I also discovered a great resource which set out to explain the meanings of symbols in the work. We talked as a class about how to decode an artwork by researching out what the symbols meant.

Personal Opinion & Art Language
It’s essential that students begin to create their own personal opinions about art using good art language, specialist art language. I’ve got a whole lesson  based on that. At the same time, they’re writing down words that they see or hear as a dictionary.

You also worked with an artist, Jade Dolman. What was her involvement?

The Art Gallery of Western Australia recommended Jade to us. She was wonderful. She added her own cultural background and her own understanding of symbols and patterns and land and belonging. She basically gave ownership to the kids, and said, “You can do it, too. You don’t have to be indigenous. You can create stories using a similar way of working that’s your own story. It’s not going to be Aboriginal art, because you’re not Aboriginal, but it’s going to be your way of working and interpreting your world.”

I think that giving ownership to the kids was really important. She was fun and she was young. The kids related really well to her. It was all very positive. Jade did about a 45 minute interactive talk. She had samples of her work and murals and things that she’d done with other schools. She got them thinking about what symbols for a man might be, a woman, and why. She brought in some objects to have a look at. She really got them interacting with lots of visuals and got them speaking and pronouncing words, as well, and then painting.

What were the challenges that you were facing in getting all this up and in the school?

The school was really supportive. I was working with 2 other art teachers who are non-specialists. They’ve loved it. I think the fact that it was so new to me meant that I had to plan quite tightly and research it carefully, and that was helpful to them.

What was the response from the rest of the school?

Really positive. We’ve got an Aboriginal Liaison Officer at the school and she was really moved to see somebody in the school taking indigenous culture seriously.

What were the things that took you by surprise in this whole exercise?

I suppose, practically, how difficult it is to paint. For the students to handle the paint and manipulate these very dexterous lines and marks and dots was a lot harder than I thought it would be. I didn’t realise what fine motor skills they would need, so that’s been a challenge. Slowing them down and planning the painting has been quite a challenge. Instead of just getting them to paint and dot, dot, dot, dot, dot. It looked quite the mess, and it didn’t really mean anything. Actually being brave enough to persuade them to paint over what they’ve done and to think and plan. The second time I was teaching it, the planning process had more depth.

How long is the program?

It’s about 20 lessons over a term, and the lessons are about 45 minutes. It’s not a creative lesson time. It’s very difficult to teach in 45-minute bursts, getting paints out, demonstrating, talking. In-depth learning is hard, so it’s very busy.

If you had to reflect on what you’ve done so far, what are the areas where you feel you’ve really learned something?

There are a whole load of resources, artists, facilitators, supporters of working in Aboriginal culture that you just don’t know are there unless you go out and look for them. We’re incredibly lucky, but you’ve got to want to teach it. The new curriculum coming in stipulates that we do actually have to teach Aboriginal culture.

I feel like I’m just on the edge of it, and the more people I talk to, the more green lights I get, to say, “Yeah, do it.” “We need more people doing what you’re doing.” I find that really encouraging.

What did you particularly enjoy the most?

What do you think the students got out of it?

They’ve learnt to look deeper, to access and discuss what they see, because it’s not just about looking at paintings. It’s about talking about what their own culture is and where that fits into Aboriginal culture. Overall I think they’ve gained acceptance, tolerance and a sense of inclusion. All of those things are really important.

What do you think the school has got from this so far?

That’s interesting. The paintings went up in the library, and I have a lot of positive feedback from staff about them. After the library they went to the staff room. Again, lots of positive feedback. I would like to take this further now. I would like this project to be the starting point of looking at what each faculty in the school is doing to address Australian Aboriginal culture. This might be just a starting point of more conversations about how we address it across all curriculum areas. It’s not just a week of talking about the Stolen Generations. It’s deeper that that.

What advice would you give a teacher planning to do something similar at their own school? 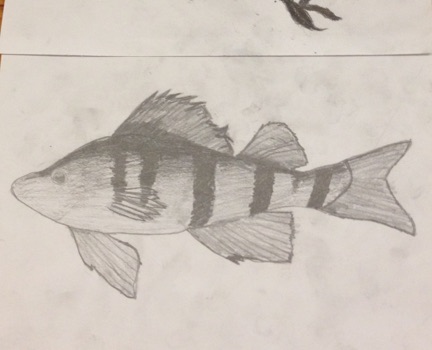