In 2009 a project at Wangkatjungka Remote Community School brought the teenagers and elders together. The project boosted school attendance to unheard of levels as well as creating an exciting event at Japingka Gallery. Here is the story of that project told by David Wroth of Japingka Aboriginal Art, the facilitator of the project.

We were keen to see how the students would engage with the elders. Many of them would have been relatives, probably grandmother connections, or maybe even great granny. It was an experiment just to see what came out of it. It was uncertain how much the older artists would want to really bring the younger artists through. It was unclear how that would work. We wanted to see how much information would flow back down to the students from watching and engaging in the artwork with older artists.

How did both groups respond? What was the level of engagement?

It was fantastic. The group of elder artists and the students had to organise themselves into a mentor and student relationship. They sorted all that themselves. They agreed that this elder would look after this student. They organised their own connections and then part of the way through the project they also had alternative arrangements so they could work with another artist.

That was interesting because with the elder artists they all have quite distinctive styles. There’s no particularly recognisable style, except for maybe their use of quite bright colour. Some of the artists are very geometric and some of them are very detailed, some of them use ochre earth colours and others have figurative elements in them. There’s a huge variety.

The students were going to shadow the senior artists. They’d go with the story and the style. We were interested to see what they could extract about painting techniques and about understanding the story. We were also observing whether they would be putting it all in context with the bigger story of their cultural connections around that.

What types of leadership are needed and how did the leadership emerge?

In that community, the leadership rests with the community. The elders and the students formed the natural alliances that worked for them. They could work together and really share stories in an appropriate way, in a kinship way.

You also needed strong support from the school, from the Principal Keith Spencer. That made the whole project possible. We needed support from the community to ensure this was a project that they wanted to happen. We needed the support of the Education Department. They needed to give permission for these students to come for half days or days. The students working with these elders on art projects became quite an extensive part of that school week. It was an important decision that needed high level backing.

How much planning did you do regarding the process that the whole thing was going to follow?

To some degree, because I was working already with the artists, I more or less followed the same types of processes that I would have anyway. In that we get a lot of canvases ready and materials and paints in small pots, and all the physical side of it. We were using a workshop, the manual arts centre in the school, so we had large ground sheets all over the floor to try to catch the paint splashes.

We set up for fifteen people to work in one studio at one time. Once the groups had made their combinations, we had slightly smaller canvases for the students than those the elders were painting on.

From that point on they were more or less working together. As the senior artists made their paintings, the students would watch and come to understand the techniques that are being used in that painting. They’d see the kinds of colour arrangements, and maybe they would adapt that themselves in understanding the story. In a way, they would shadow what the older artist was doing.

Did it end up looking very similar to what the artist?

It was quite surprising actually because what happened is the kids are really very adept painters, very skilled. These are 14, 15, 16-year olds. They were good painters, and some of the artists who are in their 70’s were getting looser in their painting styles. I tell you, the elders really had to go, “Oh, okay, these guys really know how to paint.” Everyone was sort of on their best painting behaviour.

What were the outcomes you planned for, and what evolved?

We hoped we would have  a combined exhibition that had the students’ work and the work of the older artists together in the gallery. What happened was that we had a tremendously productive time. The students really got into the work and produced a great variety of paintings. We ended up with so much work that it was a single exhibition on its own.

We had a student exhibition and we called it “Kids and Mentors.” We had a few examples, mostly of the large collaborative works where all the elder people had worked on one canvas. Our Gallery1, which is the big gallery space at Japingka, was entirely filled with students’ work. We had 35 or 40 paintings in there. They were all school kids’ paintings, and they were great. The show looked really special.

How did the gallery-going public respond?

It was fantastic, there was a real buzz. Obviously, the school let everyone know that it was on. People with past connections to the community and the school all came. The school brought down all the students, three elders, and several people from the school. The Principal happened to actually be in Perth for a principal’s meeting. Everyone was there.

The place was crowded. It was absolutely packed in the gallery. The show was a sellout. Everything just went. People said, “Well, this is fantastic.” Obviously, it was highly affordable artwork. I think everything was under $450. That’s not bad when you’re a student, selling your first painting in an exhibition, and maybe to someone for $300.

What happened with the money?

They were all clear of that arrangement prior to the exhibition?

We had to be quite precise about how we would arrange that. It was done beforehand.

How do people look at the project from the outside? What sorts of values and judgements do you think they apply?

People regularly ask how the inter-generational passing on of stories is happening in different communities. The story is always totally dependent on the local situation. I think just having the energy and the clear sense that the kids entirely relied on the elders to get subject matter for this painting – it’s obvious that it didn’t come from nowhere, it came from these old people here. The outcome was that the art was fantastic.

The school was sending the project participants down to Perth. That’s 3000 kms from Wangkatjungka. They’d be in a room full of people they don’t know, most of them white people. The kids were great ambassadors for their own community, their own experiences and their school and their art. Everyone was curious about what their lives were like in the community. It was really good. The kids stood up and talked about themselves, which is not easy to do in a place where you don’t know anyone.

Were there any difficulties that came up with the project? How were they resolved?

There weren’t really any difficulties. The main issue was whether the students were always available to participate in the program. Occasionally, we’d miss someone for a couple of days, and that did happen. There were family events happening or things that were important. Really beyond that, I don’t think there were any complications.

Were there things that took you by surprise?

I think the surprising thing was first of all, the quality of the artwork. There was a possibility that the whole thing could have fallen flat. Maybe there would be nothing to say that was about the community when we took it down to Perth for the exhibition.

The surprise was that the elders completely opened the book up and said we’ll do this together. You can come as close to our artwork as you’d like to come. The students were so technically capable of working really closely with the artists and producing great work. The surprise was the quantity, the quality, and the depths of the stories that were communicated. It was terrific.

When you reflect back over the project, how do you feel about it?

I think it was a really successful project. I think the positive values were great in the school. The kids really got engaged. I think they surprised themselves. They talked to all these strangers about their community, talked about their paintings on the wall, the relationships with the older artists.

The feedback was that most of the students were really very positive. They felt they were stars for producing their exhibition and that was a fantastic experience for them. They seemed to develop a sense of confidence from really doing something very well.

What would be your advice to somebody who’s looking to do something like this in their community?

It absolutely has to have community backing, and if it’s got the backing particularly of skilled elder artists, they have to be really open to sharing completely with students during that time. This is a really good reinforcing project in communities. It’s great to have a connection with someone who’s going to facilitate at a high level, that’s important, but the real emphasis comes from the community and needs really good backing from the school.

What was the major motivation from the students’ perspective?

I think the school offered them the opportunity for a trip to Perth, and for a Kimberley kid, that’s a holiday. It was going to be in the school holidays, so we arranged it so that the exhibition would open in the end of the first week of the holidays. They were able to organise around all that.

The kids knew that if they participated, there was going to be an exhibition in Perth. The school was going to take at least some of them, at the point we didn’t know who they’d bring. They were going to bring some students down, and if the painting sold, they promised that they would get the artist’s return from the paintings. There was a few good incentives and it was all laid out on the table, so the kids were pretty positive about it. 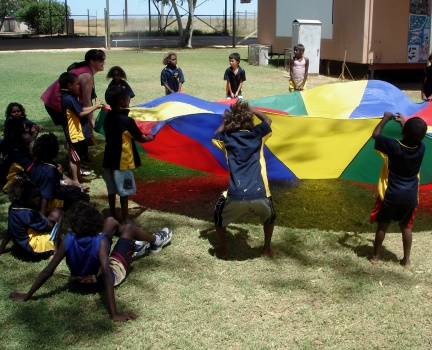