Damper, also known as bush bread or seedcake, is a European term that refers to bread made by Australian Aborigines for many thousands of years. Damper is made by crushing a variety of native seeds, and sometimes nuts and roots, into a dough and then baking the dough in the coals of a fire. The bread is high in protein and carbohydrate, and helped form part of a balanced traditional diet.  Millstones for grinding seeds into flour have been discovered which have been dated to 50,000 years old.

Although women living in remote communities may still bake damper, the arrival of pre-milled white flour has mostly replaced the use of ground native seeds. Sadly this, along with the introduction of white sugar, has contributed to health problems such as diabetes among Aboriginal people.

Traditionally, bread-making, a labour intensive task, was a woman's job and was generally carried out by several women at once. It involved collecting seasonal seeds, grain, legumes, roots or nuts, grinding these into a flour, then usually adding water to form a dough. Sometimes, as with Spinifex seeds, there would be enough moisture in the seeds to form the dough directly.

Seeds varied depending on the time of year and the area in Australia in which the people lived. In Central Australia, native millet (Panicum decompositum; Panicum australianse) and Spinifex (Triodia) were commonly used. Wattleseed, from various species of Acacia, could also be used in the flour mix. Some seeds (such as the seed of acacia) need to be heated, hulled and then ground dry, while others (such as those of grasses) would be ground with water.

Women harvested the fully ripe, dry seeds of the plant by beating the grass, or pod-laden trees in the case of wattleseed, with sticks to dislodge the seeds. Some species were eaten at the green stage and, when ground, would produce a juice at the side of the millstone, which was drunk directly. Acacia seed flour has recently gained popularity throughout Australia due to its high nutritional content, hardiness, availability, and low toxicity. Due to its low glycemic index it is also often incorporated into diabetic foods.

In the Kimberley region of Western Australia, women observed that, after the dry season, many seeds would be gathered around the opening of harvester ants’ nests. The ants had effectively collected and husked the seed for them, and they were able to collect just the seed, making their job a lot easier. After allowing the grain to dry, they could begin to prepare the flour.

After the grain was collected, it needed to be winnowed, which was done using a coolamon, a multi-purpose wooden carrying vessel. Sometimes it needed to be winnowed several times. Once the grain was winnowed, it was ground using a millstone, to create flour. The flour was then mixed with water to make a dough and placed in hot ashes for baking, either into small buns, today referred to as johnny cakes, or a large loaf, known today as damper. The dough could also be eaten raw. Cooking was a good way to prepare the bread if the group was about to travel for some time.

Bread could also be made from roots and corms of plants. In the Top End of Australia, people such as the Yolngu used the lotus root and wild taro. These were ground and then mixed to a paste to make bread.

Water lily seed bread was also popular in the Top End. The two species of water lily used were Nelumbo nucifera and Nymphaea macrosperma. During the early part of the dry season, water lilies form an important part of the diet, with seed pods eaten raw or ground into paste.

Women had expert knowledge of how to de-toxify certain plant foods. The seeds of the cycad palm, Cycas media, are highly carcinogenic when raw and require elaborate treatment including shelling, crushing, leaching in running water for up to five days, then cooking. After this they are made into small loaves, which can keep for a number of weeks.

In Queensland, the people of the Mount Tamborine area used the Bunya Pine cone (bunya nut) endemic to the area, to make bread in this way.

Janet Long Nakamarra, a Warlpiri artist from Willowra in Central Australia, describes Spinifex grass damper. “Spinifex grasses are long and yellow. People used to go out hunting and collect seeds from the spinifex. They put the seeds in the coolamon, then they clean (away) the dirt, sticks and grass.

The creator of the damper seeds (Ngurlu) was the crested pidgeon. It had to gather seeds and put them in a pile for people to collect. It also sang creation song of the seeds. The seeds are called ‘Lukarrara/Warripinyi’.” 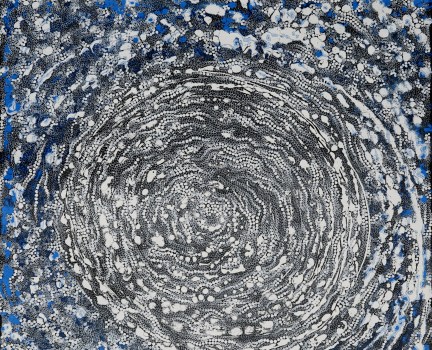