In Western culture artists are free to paint whatever subject they like. People often assume that same principle applies when they look at art in an Aboriginal art gallery. The opposite is usually true. Contemporary Aboriginal artists mostly paint the stories that belong to their family line and to places that their kinship group are custodians for.

In this article David Wroth explains more about how custodianship works and how it influences what an artist can paint.

Every Aboriginal individual is linked to a kinship system. Every kinship group has obligations under traditional law or under the cultural structure of their community. Individuals are obliged to preserve and uphold the law or the cultural songlines that they've been given. Custodianship at one level means a particular skin group, and therefore all the people in that skin group, are custodians for a site. Or they may be custodians for a particular totem.

Sacred Sites Have Owners And Managers

Under this custodianship structure there are often two kinship groups involved. There are owners and there are managers. For instance, if there is a ceremonial sacred site, there is a group of owners whose kinship group are owners of the site. This group indicate when the ceremonies will be conducted and how things will operate.

There is another group who are the managers, and as such, they are the hands-on group who carry out the performance of the ceremony. This means that there are two kinship groups who have to work together. One group give the overall strategy, the second group are the managerial group who will make sure that the ceremonies are carried out. Part of this responsibility is ensuring that all the important people who are required to be there, are there.

The coming together for ceremonies is an important socially intertwining process. It ensures that the law and the ceremony, the dreamings and the songlines, are properly performed and properly managed. Some of these may be based on the regenerative power of sites or food sources or animals. It's important that the appropriate people continue to carry out the ceremonies and recognise the ancestors. This retains the proper regenerative cycle for those specific totemic animals or those specific powers that relate to the site.

Around the world there are many examples of older societies where people would all come together to harvest a field or build a hut. The networks created by custodianship are another example of that. The whole community comes together for ceremony time and there's particular groups who have custodial roles in those ceremonies. Custodianship implies that there are some groups who have absolute involvement with particular stories within the community. They're involved in the performance but they're not involved in the management of that particular site. Alternately they will have custodianship roles in other ceremonies relating the other sites.

In terms of Aboriginal art, custodianship means that usually only the two groups who are involved, owners and managers or two particular kinship groups, can paint certain subjects. These people are the only ones who can paint the stories that relate to particular sites. It would be unusual for any other group to paint those stories because it would breach clearly understood rules of ownership.

There is often a vertical series of cultural inheritances that are going down custodial lines and going down kinship lines, where people can have predefined groups of stories that they can access because they're a part of the custodial group. There will be other groups of stories coming down in vertical lines that do not cross over their kinship group, and for which they won't have painting rights.

The right to paint certain places or certain stories is a powerful thing for these artists. They have a depth of feeling for the stories because they feel they have a direct ownership of them. As part of this ownership there are also obligations. These rights and obligations are well understood in traditional communities. You have rights because of your custodial position but you also have huge obligations. The onus is on those people to ensure that the correct ceremonies are carried out in the correct way by the correct people.

Respect For Significance of Material

This obligation structure crosses over into the Aboriginal art world in the responsibility it places on the artist. It goes beyond rules about subject matter. Artists have to find a way to express their heritage in a respectful way. The art needs to reflect the importance of the material they're dealing with. In this way there is massive generational inheritance that is being maintained by the artists.

Interest In Subjects Comes From A Cultural Obligation

All of the paintings, particularly coming from areas where traditional culture is still largely carried out, are a reflection of an artist's inheritance rather than their inclination to paint what is physically on the county. It is actually more about their position in relation to the subject. They're custodians of the story or they have a strong connection on say their mother's side to the story. It's more than just a visual interest. It's actually a cultural obligation interest in the subject that they're painting.

When a senior artist stops painting, a new artist from the group will step up and start making what becomes the major statements about that particular songline or that story.

In that sense an artist gets their artistic career within a group. Once an artist ceases to paint, someone else will be in a position to have absorbed the knowledge and step in and create something new. It won't be the same as the person who has - in a sense - just retired, but it will bring a whole new surge of energy and individual input into the story.

It's almost like there is a respectful non-competitiveness in certain areas. As one generation moves on, the next generation can step in and take on the role and revitalise or retune the stories as their generation would do it. 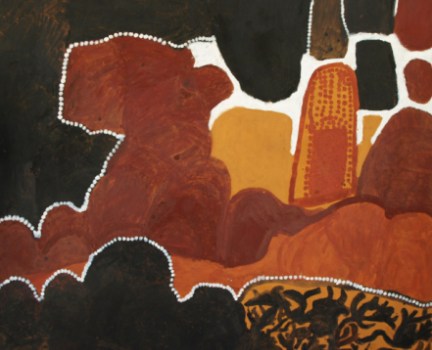