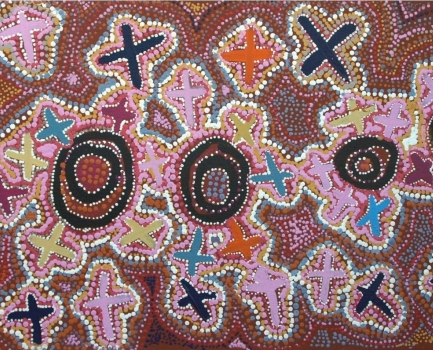 The Budgerigar (Melopsittacus undulatus) is a small, seed-eating parrot. Budgerigars are the only species in the Australian genus Melopsittacus. They are nomadic birds, and budgerigars are found throughout the drier parts of Australia where the species has survived harsh inland conditions for the last five million years. Budgerigars primarily live in open habitats, such as scrublands, open woodlands, and grasslands and are normally found in small flocks, but can form very large flocks under favourable conditions. The nomadic movement of the flocks is tied to the availability of food and water.  They feed on the seeds of spinifex, grass seeds, and sometimes ripening wheat.  Drought can drive flocks into more wooded habitat or coastal areas.

In the wild budgerigars are naturally green and yellow with black, scalloped markings on the nape, back, and wings, but they have been bred in captivity with colouring in blues, whites, yellows, greys, and even with small crests. In their wild state they are smaller that their bred counterparts.

In the Warlpiri language the budgerigar is called Ngatitjirri and it is the subject of a large ancestral Dreaming story, or Jukurrpa. In Warlpiri country large flocks of budgerigars can be found around waterholes, their presence providing critical clues as to the location of water. Custodians for the Ngatijirri Jukurrpa are the Napaljarri/Nungarrrayi women and the Japaljarri/Jungarrayi men.

Lindsay Corby Tjapaltjarri paints designs associated with the Ngatitjirri (Budgerigar) Dreaming at the claypan and rockhole site of Tjunti, west of Nyirripi community. In the Dreaming Creation era a large group of Budgerigar Ancestors came to this site from the east. They later travelled west to Tjunginya, west of the Kintore community, just over the Western Australian border. The artist states that all Budgerigars originated from this site.

Yuendumu artists Lorraine Nungarrayi Granites and Karen Napaljarri Barnes paint the Ngatijirri Jukurrpa site at Yangarnmipi, south of Yuendumu. Ngatijirri are very common around the Yuendumu area, especially after the summer rains. Men hunt for Ngatijirri nests, robbing them of eggs and juvenile birds, which are both considered delicacies. The men would also go out hunting for adult, flying ngatijirri, which they would kill by swinging branches, killing sticks or ‘karli (boomerangs) to hit the birds in flight.

The Ancestral ngaltijirri travelled to Yangarnmpi from Patirlirri, near Willowra to the east of Yuendumu and travelled further on to Marngangi, north-west of Mount Dennison and west of Yuendumu. Each time the flock of Ancestral ngatijirri landed, they performed ceremonies, singing and dancing as they flew and roosted in the trees. The sites of these ceremonies are usually depicted in the paintings as concentric circles, while cross-like shapes depict the footprints of the birds on the ground and give an indication of the large flocks of ngatijirri that can be found near Yangarnmpi and other sites close to Yuendumu. After good rains ngatijirri can successfully breed several times, resulting in an explosion of the population in a short time.