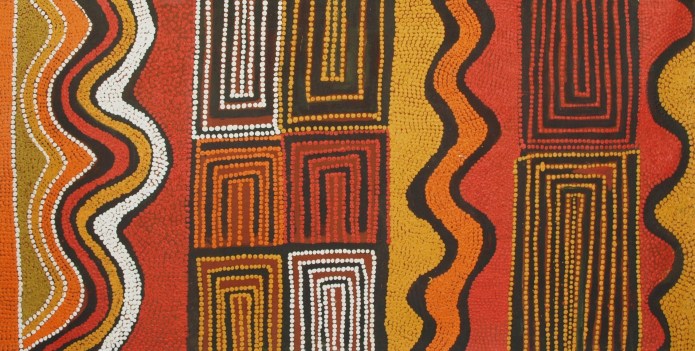 Balgo, located on the western edge of the Tanami Desert in the far north of Western Australia was established as a Catholic Mission in 1939. The settlement brought together diverse tribal groups from the western edge of the desert, a mix of different languages, traditions and ceremonial practices. These groups included Kukatja, Walmajarri, Warlpiri, Pintupi, Ngardi and Tjaru people. The community returned to Aboriginal control in the 1980s, although it has maintained strong co-operative relationships with the Catholic Church.

Family links with Papunya Tula artists may have been influential in bringing the growing contemporary Aboriginal art movement to Balgo. Residents at Balgo were aware of the painting movement as it developed at Papunya from 1971. But they also held deep concerns for the cultural values of secret ceremonial designs, which could possibly be used for paintings shown to the wider world. The relative proximity of Balgo to communities at Kintore and Kiwirrkura, and the familiarity with the Pintupi language in the region, served to reinforce the connection between Balgo and newly emerging desert painting  movement.

When a programme for literacy and arts and crafts was established at the Adult Education centre in 1981, Aboriginal people at Balgo had their first access to art supplies. The Balgo art movement gained momentum when local men painted large cloth banners for decorative use in the church. The calico banners were painted with poster paint using traditional blacks and browns. Between 1982 and 1984 Aboriginal women also began to participate in painting classes, and in 1986 The Art Gallery of Western Australia displayed the inaugural Balgo exhibition Art from the Great Sandy Desert.  By 1987 the Warlayirti Artist Co-Operative had been formed at Balgo.

Early Balgo artworks were painted in exclusively earthy tones, as seen in the dotted large-scale canvases of Donkeyman Tjupurrula Lee (c1922- 1993) and the bold tones of Sunfly Tjampitjin (c1916- 1996), whose paintings are confined to four colours. A generation of senior law men including Tjumpo Tjapangangka (c1929- 2007) and Sam Tjampitjin (c1920- 2003) painted work relating to physical features of the landscape, Tjukurpa stories (the Dreaming), and men’s ceremonial business. Many of the works include symbols referring to particular sites and Ancestor travelling-paths in the area.  Boxer Milner Tjampitjin (1934- 2008) painted distinctive grid-like work relating to the passing of temporary creeks through the landscape.

In the mid-1990s co-ordinators encouraged artists to use brushes instead of wooden dotting sticks, and introduced vivid acrylics in pinks, greens, blues and yellows. This contributed to the development of the iconic gestural style of Eubena Nampitjin (c1920- 2013), the mixed strokes of the work of  Ena Gimme Nungurrayi (1955- 1992), the barely visible colours beneath the white over-dotting in the paintings of Elizabeth Nyumi Nungurrayi (b. 1945), and the bright creations of Susie Bootja Bootja (c1935- 2003).

A great range of painting styles developed at Balgo, created by the culturally diverse and highly mobile population. Balgo’s location as a crossroad between various tribal groups has allowed for social and ceremonial exchanges with other communities.  Both men and women are permitted to paint, with each gender having ownership of particular patrilinear or matrilinear links to Country. Paintings by Balgo women, like those of Milliga Napaltjarri (c1922- 1994), often refer to Women’s Law, and include the body designs of women’s rituals, which are then camouflaged by many layers of textural dots.

Art production in Balgo has been maintained through following decades, with some artists collaborating with printmakers, and others embracing glass-making workshops. A new Cultural Centre was opened in 2002 and the relatives of the original Balgo artists, such as John Lee Tjakamarra (b. 1956), Elizabeth Gordon (b. 1954) and Pauline Sunfly Nangala (b. 1957), continued to work with evolving painting styles, while exhibiting internationally and carrying on the artistic practices of the region. 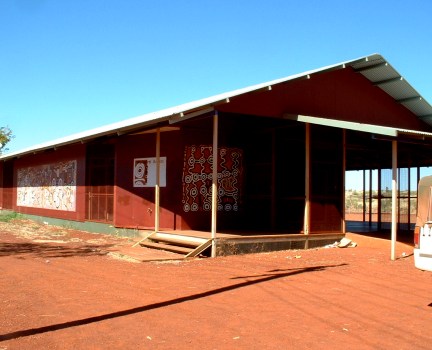